The lower reaches of the Tyne were once heavily polluted.  But the combination of the decline of heavy industry, and regulatory limits on the amount of pollutants allowed to be discharged to rivers, have resulted in major improvements in the quality or ‘health’ of the River Tyne.  This is particularly obvious in the urbanised, tidal sections.

Unfortunately, the perception that the Tyne is now ‘fixed’ is simply not true.  It may not be as bad as in the past, but pollution does still affect the Tyne and its tributaries.

Pollution is often talked about in 2 ways: diffuse pollution and point-source pollution.

The term ‘diffuse pollution’ describes small incremental additions of pollutants to a system.  Individual sources of diffuse pollution do not usually have a major environmental impact (though they can in a localised area), but combined together with many other diffuse sources they can have major impacts on river systems.

‘Point source pollution’ is what most people think of when you talk about pollution – a major discharge of pollutants at one specific point, for example from an industrial process.

However, diffuse pollution can be as much, or more, of a problem than point-sources.  It is also much more difficult to measure, particularly in terms of direct environmental impacts, and identifying and fixing the sources of the problem can be very problematic.

Causes of pollution in the Tyne Catchment

Former metal mines in the uplands are major sources of pollution to the Tyne system.  They are mostly former lead mines in the South Tyne, East Allen and West Allen.  They pollute our rivers through water discharges from mine adits, and from the transportation of spoil heap material.  These materials contain lead, zinc and cadmium, which are highly toxic in freshwater environments.

But these problems are not confined to the upper reaches of our rivers – riverbed material moves through river systems and is deposited far from its source.  Sediments in the Tyne estuary are contaminated with heavy metals which originated in the uplands, and metal-rich sediments can be found throughout the Tyne system.  In fact, metal rich sediments give rise to a rare form of riverside habitat called Calaminarian grasslands.  Metal-tolerant plants thrive on floodplains which are regularly inundated by metal-rich sediments.  These rare and important habitats and species are protected as Sites of Special Scientific Interest.  One of the big conundrums for the future is how to manage the pollution from abandoned mines to acceptable levels (as required by the EU Water Framework Directive) while also preserving metal-dependent habitats protected under UK environmental legislation. 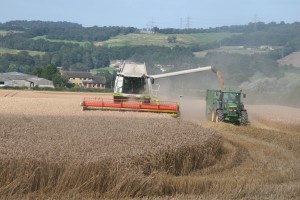 The way farms are managed can have a major impact on river health.  For example, run-off from fields and farmyards carries pollutants (soil, fertilisers, slurry) into river systems, and animals with direct access to rivers cause erosion and riverbank collapse which adds fine sediments into river systems.

Fine sediments smothering riverbeds is particularly a problem for trout and salmon, which require clean gravels for spawning, and for freshwater pearl mussels, which need clean gravels and young trout and salmon for their key early growth stages.  The addition of nutrients to rivers, for example through the overuse of fertilisers or slurry run-off, favours some species over others and changes the important balance of natural ecosystems all the way through the food chain.

A large proportion of the Tyne catchment’s is used for agriculture of various types.  Natural England and the Northumberland National Park Authority promote best practice through agri-environment schemes (the Entry Level Stewardship and High Level Stewardship schemes) throughout the catchment.  Unfortunately the Government’s Catchment Sensitive Farming programme, which gives grants to invest in infrastructure and farm improvements to reduce farming impacts on rivers, has not yet been extended to the Tyne catchment.

Sewerage and discharges from industry

Discharges to rivers are regulated by the Environment Agency.  Although much of the heavy industry along the Tyne has long gone, industrial discharges still take place, including from waste water treatment works (sewage works).  Such discharges can have localised impacts, and historical discharges from abandoned sites may fall outside the law or be difficult/expensive to remedy.

In some places, discharges don’t operate as well as they should.  For example, Combined Sewer Overflows are designed to allow direct releases of untreated material from sewage works to rivers at times of heavy rainfall, when the sewer system is under pressure and river flows are high.  However, there are places in the Tyne catchment where localised weather patterns can mean that sewer systems discharge when river flows are not high enough, because their sources are from different sub-catchments.

In rural areas, most domestic properties are not connected to mains sewage and have their own treatment – septic tanks or soakaways.  When well maintained, these work well to deal with domestic waste, however if they are not maintained or emptied often enough they contribute to the diffuse pollution load in groundwater, which then affects rivers.  It is not known how much this may contribute to pollution in the Tyne system, however with a large proportion of the catchment being ‘off-sewer’, this could be a significant contribution to pollution, particularly in smaller rivers.

We talk about flooding in more detail on the Weather extremes and Climate page however it is worth mentioning here that run-off caused by heavy rain (which we’ve experienced a lot in the summer of 2012!) carries pollutants into our rivers.  This can be directly from land, or through our drainage network from roads, buildings and hard-standing.  But either way, moving water picks up whatever is in its path, and it always moves downhill to rivers.  This is an example of how land use and land management can affect our rivers.

Pollution and the Tyne Catchment Plan

Why does a catchment approach help with the issue of pollution?

The example of abandoned mines in the uplands causing pollution issues in the Tyne estuary (see above) is a classic example of how rivers work as systems.  Tackling only the site of the problem (the estuary) is not a long-term solution – only by tackling the source (spoil heaps and mine discharges) can the problem be solved for good.