There is much debate about whether our climate is changing due to human impacts.  But when it comes to looking after our rivers, it doesn’t really matter whether you think climate change is real or not – the weather extremes we experience affect us and our rivers.  You only have to look back on 2012 – now officially the wettest ever recorded in the North of England – to see how one extreme can cause misery, disruption and financial loss for people, and we haven’t yet been able to fully measure how it has affected our river ecosystems.

Natural systems can be resilient to weather extremes because they develop and evolve in reaction to long-term weather patterns.  But the Tyne catchment is not a natural system – it is heavily managed and influenced by people.  The combined pressures of human impacts and natural weather extremes on river ecosystems are not well understood; our rivers may not be as resilient as we think they are.

We do know that in summer 2012 the wet weather: 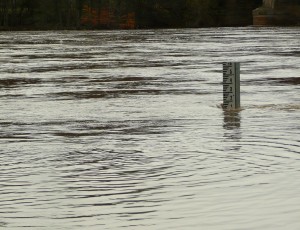 Catchments run on the basis of the hydrological cycle – rain, snow, evaporation, transpiration (by plants), runoff, and connectivity to the river (land drainage).  Critical elements are driven by global climate.  Consider two elements of the Tyne catchment driven by air temperature: the amount of evaporation and transpiration from vegetation, and water temperature.  Rates of evaporation are controlled partly by temperature, but wind speed is also  big factor, as we know from drying washing on the line.  We dry out more quickly after heavy rain if evaporation and transpiration rates are raised in a warmer climate, but we also face quicker drought symptoms if this occurs.  A warmer atmosphere transfers more energy to water – thus warming the Tyne stream network to conditions perhaps beyond the tolerance of many fish species, notably the cold-adapted ones like salmon.

Because changes of temperature and carbon dioxide affect land use decisions such as what farm or forest crop to choose, on the basis of yield but also risk of disease, the Tyne catchment land surface will change before our eyes.  It might be some time before we see vineyards, but new ventures such as maize, free-range pigs and other silt yielding enterprises may soon be a common sight.  The whole concept of biosecurity changes with subtle changes in climate and the globalisation of trade – witness Ash dieback and the spread of invasive non-native species.

Droughts are less of a problem in this region with Kielder Reservoir well able to serve us for the current water resources planning period.  But if other regions are short of water, what will be the impact on of Tyne water sold on the free market: our river is the pipeline.  What will an aggressive water supply policy mean for the Kielder forests?  Trees ‘use’ more water than moorland, though a mature forest cover has advantages for floods.

Climate and the Tyne Catchment Plan

The Tyne Catchment Plan reflects what was on our minds in 2012, and so it contains a lot of actions around the impacts of wet weather, particularly flooding.  But lack of water can be just as much of a problem.  The Plan would have looked very different if 2012 had been a year of drought.

It is a very wise investment to future-proof our rivers and our communities (especially those who live near them or depend on them) to weather extremes in the future.  A widespread debate, followed by widespread action, is needed about how we ‘smart-sandbag’ our riverside assets.  We shouldn’t wait for the emergency to hit, but instead take a community-led and catchment-led approach to flood management.

Some project work to date has focused on increasing the resilience of our rivers to the rigours of the future.  But much more needs to be done.