A healthy and biodiverse catchment that is valued and enjoyed, contributing to the economic and social well-being of local communities.

Aims for the Don

To identify and bring together all relevant stakeholders and foster a fully integrated approach to identifying and managing the issues affecting the River Don and its catchment. Interventions will be sought that deliver multiple benefits : environmental, economic and social.

Restoration of the River Don channel and the reconnection of the river to its wider catchment will provide a biodiverse and robust ecological network that is resilient to the impacts of climate change and increased human pressures. Creation of new water dependent habitat will support both aquatic and terrestrial species, allowing increased movement within the catchment and the expansion of wildlife populations.

The River Don and its catchment will provide a high quality environment that attracts new business and facilitates economic growth. Strategic developments, including IAMP (International Advanced Manufacturing Park), South Follingsby and transport enhancements such as the A19 Testos Junction scheme will integrate into the landscape, delivering spaces capable of providing multiple benefits and truly sustainable development. Restored river channels and natural flood management measures will seek to reduce flood risk.

There will be increased recreational opportunities for residents and visitors, improving health and wellbeing and increasing the value placed on the river and wider catchment by the local community. This will begin to change behaviours and lead to reduced littering and fly tipping.  Pollution of watercourses from industrial and agricultural sources will be reduced as stakeholders are engaged and communities and businesses recognise the true value of the river and its catchment. 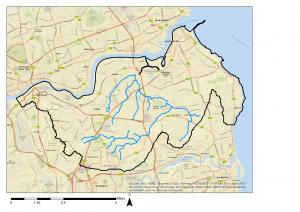 About the River Don and its Catchment

The River Don is a principal tributary of the lower Tyne, flowing north between Springwell and Jarrow. It has a mixed urban and rural catchment covering 43km2. Initially the catchment drains a mainly agricultural landscape, both arable and pasture, before the river enters the urban area of South Tyneside, with industrial, post industrial and residential land use.

A total of 3 Sites of Special Scientific Interest (SSSI) and 42 Local Wildlife Sites (LWS) are contained within the catchment. The river itself is designated as a LWS from source to the River Tyne. Ecological interest includes areas of salt marsh, semi-natural grasslands and meadows, riparian habitat and lowland fen. The river acts as an important corridor for wildlife, hosting a regionally significant water vole population and supporting otters. Breeding and wintering bird assemblages are significant on farmland within the rural areas.

The Don waterbody is classified as having poor overall and ecological status under the Water Framework Directive (WFD) and is designated as heavily modified. There has been channelization and straightening within the urban areas and ditching in rural areas, which has disconnected the river from the floodplain.

Modification has led to loss of habitat diversity and the creation of barriers for fish migration.  There has been some restoration within the urban areas; the tidal section was modified extensively in the 1990s and the Primrose Local Nature Reserve created. There is potential to deliver further habitat creation across the catchment.

As a heavily modified waterbody, the Don cannot meet Good Status under WFD due to the extent and impact of structural changes, but can reach Good Ecological Potential if water quality parameters can be brought to good status and if all possible mitigation measures are implemented.

Water quality is currently at Poor Status due to high levels of ammonia and phosphate. Reasons for the failure of the Waterbody to achieve Good are poorly understood, but are likely to be due to both diffuse and point source pollution from multiple sources. There are areas of agricultural and grazing land in the catchment, a number of consented intermittent discharges, identified misconnections at surface water outfalls and areas of contaminated land, all of which could be contributing to the poor water environment. There are a number of locations within the Don affected by flooding (surface, fluvial and sewer) and a number of drainage areas across the catchment have been prioritised by the Northumbria Integrated Drainage Partnership (NIDP) for integrated drainage studies to investigate.

At several locations across the Don catchment there are proposals for significant new developments, some of which are considered to be of national significance. These developments will inevitably lead to localised habitat loss but may present an opportunity to enhance habitats in mitigation and provide opportunities to improve water quality and reduce flood risk. Plans are particularly advanced for the IAMP.