Engaging with people and raising river awareness is a key theme in the Tyne Catchment Plan.  This is because one of the big issues raised by the people who responded to our survey was lack of knowledge or concern about rivers.  Anti-social behaviour, including people not picking up after their dogs, littering, camping by rivers in summer, and causing damage, was a major concern.  Access to rivers for recreation was also one of the major issues raised in the survey.

Riverside environments are important for recreation and also as part of physical river systems.  If they become degraded then their value to people is reduced and they are likely to become further damaged and undervalued.  Encouraging people and communities to understand the importance of rivers leads to them being more valued, and therefore more likely to be cared for and remain accessible to people.

The ‘cost’ of our choices

Many people don’t realise how important rivers are for people.  They provide vital natural corridors, particularly in urban areas, for people to exercise, and can have an important positive impact on people’s health and wellbeing.  Rivers carry out vital services – for example they provide water for public supply and for industry, and they carry away our pollutants.

A good example of how our choices affect our environment and our wallets is that of drinking water supply.  The quality of our rivers and how we use water has a direct impact on the cost of turning on a tap.  If the water source of is of poor quality then it requires more treatment before it is safe to use.  This uses energy and chemicals.  Waste water is treated, again using energy and chemicals.  Although abstraction of water from rivers is regulated, if we are wasteful the cost of pumping and treating the additional water has a negative impact on our wider environment (by way of carbon emissions from energy use and lower river flows) and on us (bigger water bills). 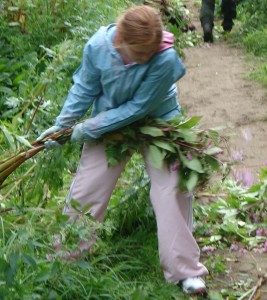 A community approach to protect and care for our rivers already works in some parts of the Tyne catchment.  River Watch groups in the middle of the catchment (eg. Corbridge and Stocksfield) are the ‘eyes and ears’ for the Tyne and its tributaries.  Group members carry out a range of vital roles including reporting pollution events, taking water samples, monitoring temperature, removing invasive species during the growing season, monitoring fly life, and tackling access issues.  However the coverage of these groups is limited, and particularly poorly represented in urban areas.

Engagement/awareness and the Tyne Catchment Plan

Our rivers will benefit from a wider and better understanding of their value for our own wellbeing as well as for our wallets.  If they are widely valued then they will be cared for.  This is why engagement with people and raising awareness of river issues is a major theme in the Tyne Catchment Plan.  The Plan contains more than 25 proposed projects linked to raising awareness, education and improving access to rivers, with a focus on building communities to work together on river improvements, including:

We are developing a simpler version of the Plan designed to be more accessible for communities and the public.