What is a catchment?

In the Tyne Catchment Plan we use the following explanation of a river catchment: an area of land where surface water converges to a single point, such as an estuary, sea or ocean.

So the Tyne catchment is all of the land which runs downhill into burns, streams, rivers, drainage systems (including road drains and sewers) and ends up flowing into the sea at Tynemouth.

River catchments are as much about land as they are about water.  98% of the rain falling on the Tyne catchment hits land before making its way into lakes, reservoirs, streams, rivers, groundwater, and eventually to the estuary and the sea.  The way we manage land significantly affects the quality of our rivers.  That is why many of the Goals and Projects in the Tyne Catchment Plan relate to land use and riverside management. 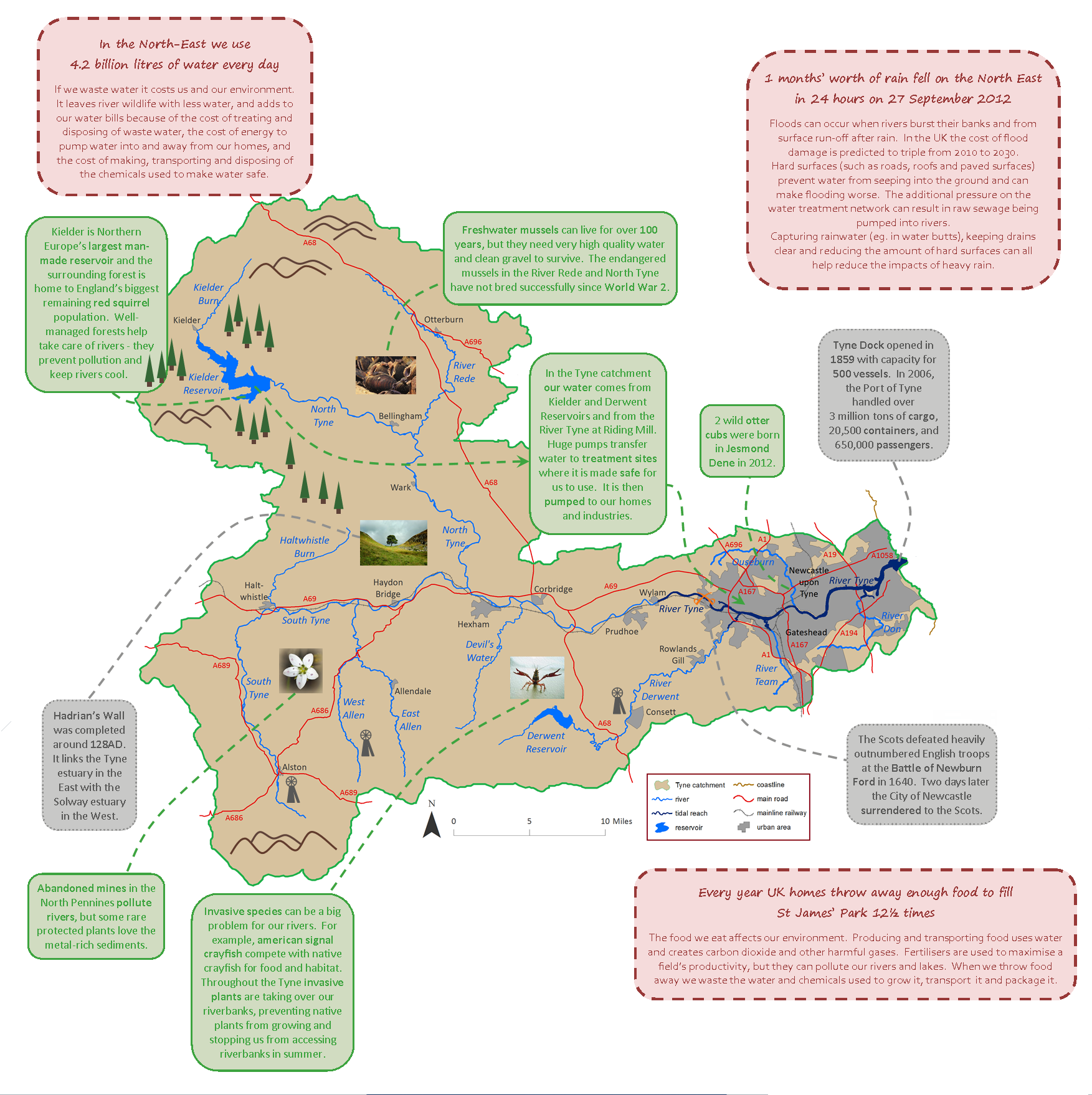 Why work at a catchment scale?

River systems are connected from source to mouth.

Although it can be hard to imagine, what happens in or near rivers in the uplands (eg. around Alston) can affect what happens in the River Tyne at Newcastle and Gateshead.  For example, one of the biggest problems in the Tyne catchment is the legacy of mining in the valleys of the South Tyne and the East and West Allen.  Water flowing from abandoned mines contains heavy metals, which are toxic to fish and other important elements of river ecosystems.  Material from spoil heaps is carried into upland rivers after heavy rain, and then all the way down to the Tyne estuary where it forms part of sediments which are dredged for boat access.  Dredgings which contain higher than usual amounts of heavy metals can be difficult to dispose of.

Likewise, pollution in estuaries can affect fish which migrate between freshwater and the sea (eg. salmon and sea trout).  If they are affected by pollution, or cannot access spawning areas because of man-made barriers like weirs and reservoirs, then their ability to reproduce is affected.

These are just 2 simple examples.  There are countless other examples of animals, plants, habitats etc. that are affected by the connectedness of rivers, and by how we treat them.  And plenty more that we don’t yet know about or understand fully – we still have plenty to learn about river ecosystem interactions.

Creating plans to improve rivers at a catchment scale means taking a joined-up ‘big picture’ approach.  At this scale we can identify the pressures on our rivers and come up with strategies to improve or remove them that will work, because they acknowledge that rivers are complex and inter-connected systems.